2:97 Say: "Whoever is an enemy to Gabriel, then know that he has sent it down into your heart by God's permission, authenticating what is (already present) (bayna yadayhi), and a guide and good news for the believers."

3:3 He sent down to you the Scripture with truth, authenticating what is (present with it) (bayna yadayhi); and He sent down the Torah and the Injeel.

5:48 And We have sent down to you the Scripture with truth, authenticating what is (present) (bayna yadayhi) of the Scripture and superseding it. So judge between them by what God has sent down, and do not follow their desires from what has come to you of the truth. For each of you We have made laws, and a structure; and had God willed, He would have made you all one nation, but He tests you with what He has given you; so strive to do good. To God you will return all of you, and He will inform you regarding that in which you dispute.

6:92 And this is a Scripture which We have sent down, blessed, authenticating what is (present with him) bayna yadayhi, and that you may warn the capital of the towns and those around it. And those who believe in the Hereafter believe in it, and they are dedicated to their communion.

10:37 This Qur'an could not have been produced without God, but it is to authenticate what is (already present) (bayna yadayhi), and to give detail to the Scripture in which there is no doubt, from the Lord of the worlds.

12:111 In their stories is a lesson for the people of intelligence. It was not a narration that was invented, but an authentication of what was (already revealed) (bayna yadayhi) and a detailing of all things, and a guidance and mercy to a people who believe.

34:12 And for Solomon the wind was given, traveling one month coming and one month going, and We caused a spring of tar to flow for him. And from among the Jinn are those that worked (for him) (bayna yadayhi) by his Lord's leave/permission; and any one of them who turns from Our commands, We shall cause him to taste the retribution of the Fire.

34:31 And those who rejected have said: "We will not believe in this Qur'an, nor in what is (already with him) (bayna yadayhi)." And if you could but see these transgressors when they stand before their Lord, how they will accuse one another back and forth. Those who were weak will say to those who were mighty: "If it were not for you, we would have been believers!"

35:31 And what We inspired to you from the Scripture, it is the truth, authenticating what is (present) (bayna yadayhi) . God is Expert of His servants, Seer.

46:30 They said: "O our people, we have heard a Scripture that was sent down after Moses, authenticating what is (present with him) (bayna yadayhi). It guides to the truth; and to a Straight Path." 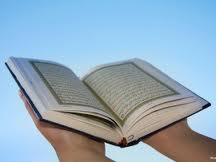 Email ThisBlogThis!Share to TwitterShare to FacebookShare to Pinterest
Labels: bayna yadayhi, between his hands